I recently read a book from 1974 written by Eugen Avramoff about the physiological problems that occur during stereotype or repeated physical effort to both trained and untrained individuals. I want to synthesize some of his ideas in this article. It’s a very good book, and I relate to it entirely.

Before all, don’t imagine that if the book is old, it is automatically outdated, useless and can’t be used as a reference. After all, all our contemporary books are based on the old ones.

To begin with, you need to do cyclic or repetitive training to benefit from what physical effort offers. Once you train consistently, there are some “problems” that stereotype training causes, and by understanding them better, you can increase training performance or even compete better if you are a pro athlete.

Don’t jump steps in your progression

Your training needs to be adequate to your capacity to adapt, especially if there is also mental stress. Otherwise, you can overload the nervous system, leading to overuse and perhaps chronic fatigue. Therefore, don’t jump the phases of adaptation.

For instance, if you just began calisthenics training and feel like you struggle with 6 bodyweight pull-ups, don’t replace bodyweight pull-ups with weighted pull-ups to develop more strength because you jump over important adaptation phases. In this situation, keep training bodyweight for a few weeks or months straight, even if you should be doing strength training with added weight to attain more strength. It doesn’t work like that!

Second, if you intend to go to the gym to lift heavy plates and barbells, you should still train bodyweight for 2-3 months before lifting heavy. Or at least lift weights progressively. The correct order is always from easy to hard and from simple to complex.

If you are not used to running, never begin with full-speed sprints, fast running, or very long distances. Try to build stamina first and learn the proper technique for different types of runs. You can’t be a fast runner unless you have refined the skill. The leg muscles and nervous system require adaptation, so train gradually.

Continuous physical effort decreases the electrolyte levels and consequently reduces the work capacity. This is even more important during a race or sports competition, not just during a workout session.

Normally, the muscles lose potassium every time we exercise intensely, but according to a study from 1963, more experienced individuals who are adapted to physical effort lose more intracellular potassium than untrained trainees. It is an interesting discovery, and it makes perfect sense since a more adapted and trained individual will always have a higher work capacity and do more volume or train to a higher intensity and perhaps even more frequently.

On the other hand, unadapted individuals will always lose more sodium, especially through sweating, and this can cause muscular cramps. If you just started to train, you must progressively dose the volume and intensity. Anyways, you are more likely to lose sodium during aerobic efforts. You gradually lose less and less sodium or other minerals through stereotype training.

Then, if your stamina is low during aerobic efforts, instead of starting your endurance training by running 10k-15k directly, without being used to these distances, it would be better to do laps of 800 meters at a steady pace with pauses of 30-60 seconds between. Keep a heart rate of around 130-140 bpm. It is the best method for your organism to learn to consume oxygen more efficiently.

Moreover, your daily nutrition should consist of foods relatively rich in sodium, potassium, calcium, magnesium etc. But there is no need for supplementation unless you are a professional athlete or compete in a race.

Ionized calcium regulates the contractile function of the muscle fibers. Ionized calcium is the amount of free calcium in the blood that is not attached to protein. Trained individuals will create the conditions of maximum ionic calcium during physical effort but also during rest periods. By having a good amount of calcium in your diet, you will increase the efficiency of your working muscles, and you will consequently increase the capacity to contract more powerfully and faster, leading to greater strength and endurance, fewer risks of injuries and so on.

I have a very sustainable diet that is not restrictive in any way, so if you are curious to see it, then watch the video below:

Those who practice constant physical effort will have during the rest period an increased basal metabolism. Eventually, it will lead to better energy management and burning more calories at rest. That’s a great fact to know if you are overweight and need to burn body fat.

You can increase your basal metabolism by doing aerobic physical efforts in the form of repeated endurance training, which is done at 120-140 bpm. This effort involves being in an ongoing movement for a relatively long time, but speed influences the intensity and oxygen demand. Oxygen consumption is always dependent on the intensity performed by the muscles.

For instance, during an endurance run, adopt a steady and easy pace, and if overweight and untrained, do laps of 400-800 meters at the same pace but with a short break between (30-60 seconds).

The growth in speed of your metabolism is bound by the growth of the physiological activities on account of large oxygen consumption. That’s the theory based on which you know how important constant physical effort is in having a metabolism that works efficiently and can also manage the stored energy a lot more efficiently. It’s the best way to stay fit and healthy.

Physical effort is a catalyst for the nervous and muscular systems. And because it boosts the cellular nervous metabolism so efficiently, the central nervous system will determine the excitability on the muscular level and the reflectivity, which provokes acceleration of the transmitted nervous impulses. It’s why you can unlock more strength from a point on, even if you can’t notice any muscular modifications or hypertrophy.

The more complex an exercise is, the faster you fatigue the central nervous system. This happens because it requires more concentration and attention over the complex movements that you have to do. You absolutely need to have a rhythmic movement because it delays fatigue. You practically need rhythmic neuromuscular activity. A constant and stereotypical cadence and tempo provide effort economy, and you can exercise for longer.

If you spontaneously add unnecessary movements to your exercise, you tire quicker. So, do not improvise if you intend to resist for long. If you decide to run at a steady pace for 40 minutes and incorporate short bursts of sprints while running, then do it in established intervals or defined distances. But if you intend to confuse and tire up the nervous system fast, then go ahead and break any rhythm. Always remember that the nervous system depletes the organism of glucose.

Practically, you utilize more resources every time you break the rhythm, which decreases the efficiency – crucially important if you race or compete as a pro athlete.

Train before the formation of lactic acid

During anaerobic efforts and by constantly increasing the volume, sooner or later, you drain the anaerobic mechanisms, or they get blocked by the central nervous system. You are either forced to interrupt your exercise or reduce its intensity in this situation.

For example, if you train for maximum speed and acceleration, sprint before the threshold of lactic acid formation. Lactic acid forms quickly at 90-100% intensity, in about 5 and 20 seconds. So, do sprints of 40 to 100 meters.

This type of training develops motor qualities such as endurance, speed, strength and muscle elasticity. The recovery is also essential, so based on how trained you are, rest one or two days before repeating such a workout.

Never limit yourself to strength training only

Resistance training is typically an anaerobic effort, and it’s highly effective, but do not limit your workout to lifting or calisthenics strength training only. It’s not everything about muscles and how strong they can contract to move a heavy object.

General fitness or the proper physical condition is defined based on the capacity to transport oxygen by the cardiorespiratory system. Everything I have recommended will train your cardiovascular system to perform better in aerobic and anaerobic efforts. Bodyweight bodybuilding is similar to classic bodybuilding, except it relies majorly on compound bodyweight exercises. I say majorly because most of the guys actually do Training recommendations for men over 50

First and foremost, I am not insinuating that men over 50 are physically weak. By all means, I believe that many of them are incredibly 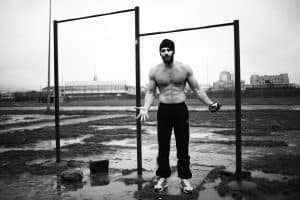 Where can I train calisthenics?

Calisthenics is essentially bodyweight training derived from gymnastics. I am not wrong when I say that calisthenics is resistance training, and because you utilize your